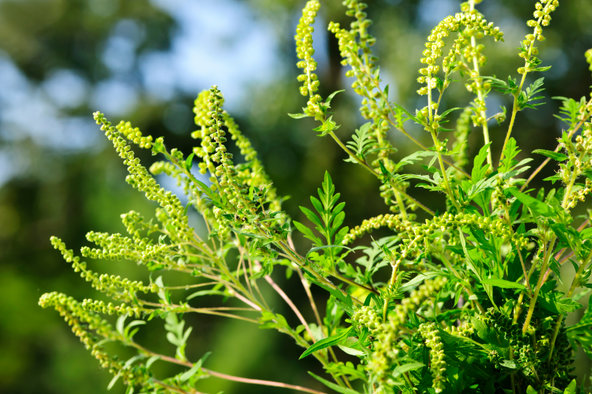 iStockRagweed is a common allergen.

People hoping to find an allergy-free haven may be out of luck. A new study has found that no region of the United States is allergy-free, but the kind of allergy people are likely to suffer from varies by region, race and socioeconomic status.

Researchers gave blood tests to 8,124 people, 856 of them children under 6, to detect immunoglobulin E antibodies, or IgEs. The presence of an IgE antibody that reacts to a specific substance increases the risk of having an allergy-related illness ike allergic asthma, hay fever or rash.

The scientists tested people for antibodies to a range of potential allergens, including cats, dogs, milk, cockroaches, peanuts, grass, ragweed and shrimp.

No matter where they lived, about 45 percent of people over 6 had positive tests for at least one allergen, and so did 36 percent of the children 1 to 5 years old.

“To me, the biggest surprise is that the level of sensitivities didn’t differ region to region,” said the senior author, Dr. Darryl C. Zeldin, a scientific director at the National Institute of Environmental Health Sciences. “This goes completely against what most people would have said. The bottom line is that sensitization patterns differ by region, but overall sensitization rates are high.”

The most common positive tests among the adult group were for dust mites, grass and ragweed, with almost 20 percent of the population showing sensitivity to each. About 12 percent of people over 6 were sensitive to dogs or cats, and among the youngest children, milk and eggs were the most common positive tests. Inhalant allergies like ragweed and grass peaked in the teens and 20s, then decreased later in life.

Race and socioeconomic status also made a difference. Non-Hispanic blacks had the highest sensitivity to all tested allergens except Russian thistle and egg. Sensitivity to cockroaches and shrimp were associated with lower economic status, and dog and cat allergies were more common in higher income groups.

The study, published online in The Journal of Allergy and Clinical Immunology, also found that allergies cluster in groups: people sensitive to dust mites are also likely to be sensitive to grass and tree pollen; sensitivity to peanuts, usually considered a food allergy, tends to cluster with plant allergies; cockroach and shrimp sensitivity are a common pair, probably because they contain a similar allergen, a protein called tropomyosin.

Ganesa Wegienka, an epidemiologist at Henry Ford Hospital in Detroit who was not involved in the research, said that the paper provided “a nice snapshot of what’s going on in the U.S.,” and she was especially impressed with the data on clusters of sensitivities. “This has implications for doctors and patients,” she said. “If a child is sensitized to one allergen in a cluster of allergens, maybe the doctor should be looking at other allergens in the cluster to think about treatment plans.”