This article is interesting,

The main take away is  “glucose consumption has a direct influence on the activity of proinflammatory genes.”  The implication is that if glucose has a role to play in the promotion of autoimmune disease, a dietary approach for autoimmune conditions should include,  low glycemic diet, intermittent fasting and removal of food sensitivities. 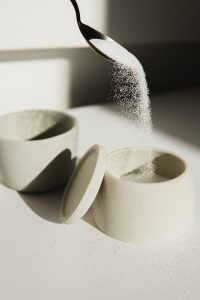 Excessive sugar consumption can promote inflammatory processes in the body and facilitate the development of autoimmune diseases. A research team has now deciphered new details of these processes.

People who consume sugar and other carbohydrates in excess over a long period of time have an increased risk of developing an autoimmune disease. In affected patients, the immune system attacks the body’s own tissue and the consequences are, for example, chronic inflammatory bowel diseases such as Crohn’s disease and ulcerative colitis, type 1 diabetes and chronic inflammation of the thyroid gland.

The underlying molecular mechanisms that promote autoimmune diseases are multilayered and complex. Now, scientists at the Julius Maximilians University of Würzburg (JMU) have succeeded in deciphering new details of these processes. Their work support the notion that excessive consumption of glucose directly promotes the pathogenic functions of certain cells of the immune system and that, conversely, that a calorie-reduced diet can have a beneficial effect on immune diseases. Based on these findings, they also identified new targets for therapeutic interventions: A specific blockade of glucose-depended metabolic processes in these immune cells can suppress excessive immune reactions.

Dr. Martin Väth is responsible for the study, which has now been published in the journal Cell Metabolism. He is a junior research group leader at the Institute of Systems Immunology — a Max Planck research group under the umbrella of JMU that focusses on the interplay of the immune system with the organism. Collaborators from Amsterdam, Berlin, Freiburg and Leuven were also involved in this study.

Glucose transporter with a side job

Martin Väth explains: “Immune cells need large amounts of sugar in the form of glucose to perform their tasks. With the help of specialized transporters at their cell membrane, they can take up glucose from the environment.” Together with his team, Väth has showed that a specific glucose transporter — scientifically named GLUT3 — fulfills additional metabolic functions in T cells besides the generating energy from sugar.

In their study, the scientists focused on a group of cells of the immune system that have not been known for very long: T helper cells of type 17, also called Th17 lymphocytes, which play an important role in regulating (auto-) inflammatory processes.

“These Th17 cells express lots of GLUT3 protein on their cell surface,” Väth explains. Once taken up, glucose is readily converted to citric acid in the mitochondria before it is metabolized into acetyl-coenzyme A (acetyl-CoA) in the cytoplasm. Acetyl-CoA is involved in numerous metabolic processes, including the biosynthesis of lipids.

However, acetyl-CoA fulfills additional functions in inflammatory Th17 cells. Väth and his team showed that this metabolic intermediate can also regulate the activity of various gene segments. Thus, glucose consumption has a direct influence on the activity of proinflammatory genes.

According to the researchers, theses new findings pave the way for the development of targeted therapy of autoimmune diseases. For example, blocking GLUT3-dependent synthesis of acetyl-CoA by the dietary supplement hydroxycitrate, which is used to treat obesity, can mitigate the pathogenic functions of Th17 cells and reduce inflammatory-pathological processes. The so-called “metabolic reprogramming” of T cells opens new possibilities to treat autoimmune diseases without curtailing protective immune cell functions.

Materials provided by University of Würzburg. Original written by Gunnar Bartsch. Note: Content may be edited for style and length.

Connecticut Center for Natural Health is at a Great, New Location in Middletown!